Uniper has ambitious plans for its operations in the Humber. It aims to develop a hydrogen hub at its Killingholme site, with up to 720MW blue hydrogen and 100MW green hydrogen production to be operational later this decade 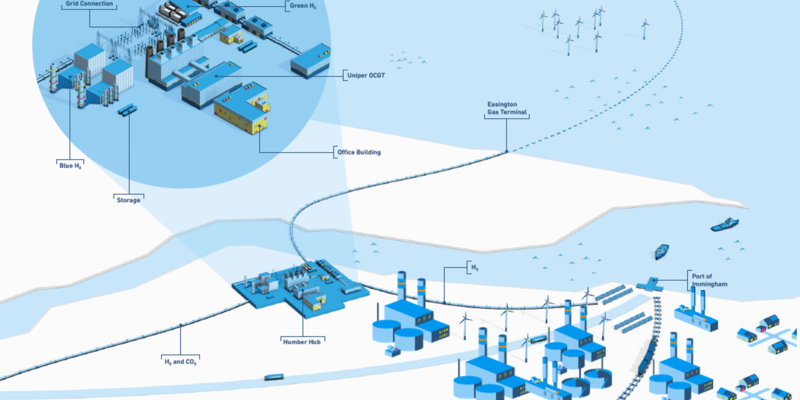 Uniper is also a partner in the Zero Carbon Humber project, part of the wider East Coast Cluster, recently selected as one of two carbon capture and storage (CCS) clusters to receive initial government support under the government’s cluster sequencing process.

In April 2022, Uniper announced that it has signed an agreement with Shell to further progress its Humber Hub plans to produce blue hydrogen, using gas reformation technology with CCS. As part of the East Coast Cluster, the captured carbon will then be stored permanently offshore in the Northern Endurance Partnership’s facility in the UK’s North Sea

The Humber Hub Blue Project recently passed the eligibility criteria for Phase-2 of the government’s cluster sequencing process. Successful projects which could be eligible for Government funding will be shortlisted from July 2022. Phase-2 projects are expected to take final investment decisions from 2024 and to then be operational from 2027.

Uniper believes that the key to transforming the Humber region is for companies to work together and collaborate on joint goals. With this in mind, Uniper has also partnered with Siemens Energy, Toyota Tsusho and Associated British Ports (ABP) on Project Mayflower, as part of its Humber Hub plans for green hydrogen production. In 2021, the partners successfully secured matched funding from the Clean Maritime Demonstration Competition, funded by the Department for Transport and delivered in partnership with Innovate UK. This has enabled a feasibility study to be carried out for Project Mayflower, looking at how port handling equipment could switch from fossil fuels to hydrogen and how creating this hub would unlock hydrogen and ammonia as a fuel for onward port-related transport.

The Humber Port of Immingham, adjacent to Killingholme, is the UK’s busiest port by tonnage, handling a cargo volume of 46 million tonnes annually. The Mayflower feasibility report findings showed that hydrogen offers significant benefits for the decarbonisation of port operations over direct electrification such as higher port equipment lifting capacities and reduced charging times of port side vehicles, meaning less disruption to continuing operations. The port is one of four Humber ports which together support c. 34,500 jobs nationally and contribute over £2.5 million to the British economy each year. Provision of low carbon fuels within ports could facilitate the decarbonisation of port operations, retain industry jobs and skills within the UK and develop a firm knowledge base, to enable new local clean maritime and transport industries to flourish.

Uniper’s Killingholme is situated in the heart of the Humber - often described as the most carbon intensive industrial region in the UK. HICP’s assessment of emissions for its 2021 report, showed that Humber emissions across industry and power generation totalled 20 Mt of CO2 per year in 2018. Decarbonising the Humber will have a transformative impact – allowing its energy intensive industries to not only continue to operate but to thrive, creating wider benefits for the economy and those living and working in the region.

And with the UK Government signalling the need to align the UK Emissions Trading Scheme with the country’s Net Zero targets, many more industries will need to look for ways to decarbonise.

In 2018, the Government commissioned Element Energy and Jacobs to carry out a study* of potential industrial fuel switching to either biomass, hydrogen or electric technologies. The findings showed that by 2040, there is potential for UK industrial fuel switching to be saving up to 18 million tonnes of CO2 per year, depending on the technology solution adopted. The report found that the estimated overall technical potential for hydrogen is the highest of the three fuel types examined.

The Government’s own Hydrogen Strategy highlights the vital role of low carbon hydrogen in achieving net zero. Analysis by BEIS** for the Climate Change Committee (CCC)’s 6th Carbon Budget suggests hydrogen could make up 20-35 per cent of UK final energy consumption by 2050. And in its more recently published Energy Security Strategy, the Government doubled its low carbon hydrogen production targets to 10GW.

The hydrogen produced at the proposed Humber Hub could be used to decarbonise heavy industry, transport, heating and power, along with maritime operations, throughout the Humber region and beyond.

Uniper’s plans would also contribute to the Humber’s emergence as a leader in clean energy production; future proofing the industry and ensuring a skilled workforce to provide the essential services that we need, now and for the future.

Hydrogen will be at the forefront of helping the UK deliver its net zero ambitions by 2050 and the Humber is a strategically significant location in the energy transition. Uniper, as a pioneer in the field of hydrogen, can play a key role in making this happen.

Uniper is a leading international energy company, has around 11,500 employees, and operates in more than 40 countries. The company plans for its power generation business in Europe to be carbon-neutral by 2035. Uniper’s roughly 33 GW of installed generation capacity make it one of the world‘s largest electricity producers. The company's core activities include power generation in Europe and Russia as well as global energy trading and a broad gas portfolio, which makes Uniper one of Europe’s leading gas companies. In addition, Uniper is a reliable partner for communities, municipal utilities, and industrial enterprises for planning and implementing innovative, lower-carbon solutions on their decarbonization journey. Uniper is a hydrogen pioneer, is active worldwide along the entire hydrogen value chain, and is conducting projects to make hydrogen a mainstay of the energy supply.

The company is based in Düsseldorf and is one of Germany’s largest publicly listed energy supply companies. Together with its main shareholder Fortum, Uniper is also Europe’s third-largest producer of zero-carbon energy.

In the UK, Uniper owns and operates a flexible generation portfolio of seven power stations, a fast-cycle gas storage facility and two high pressure gas pipelines, from Theddlethorpe to Killingholme and from Blyborough to Cottam. We also have significant long-term regasification capacity at the Grain LNG terminal in Kent, to convert LNG back to natural gas. 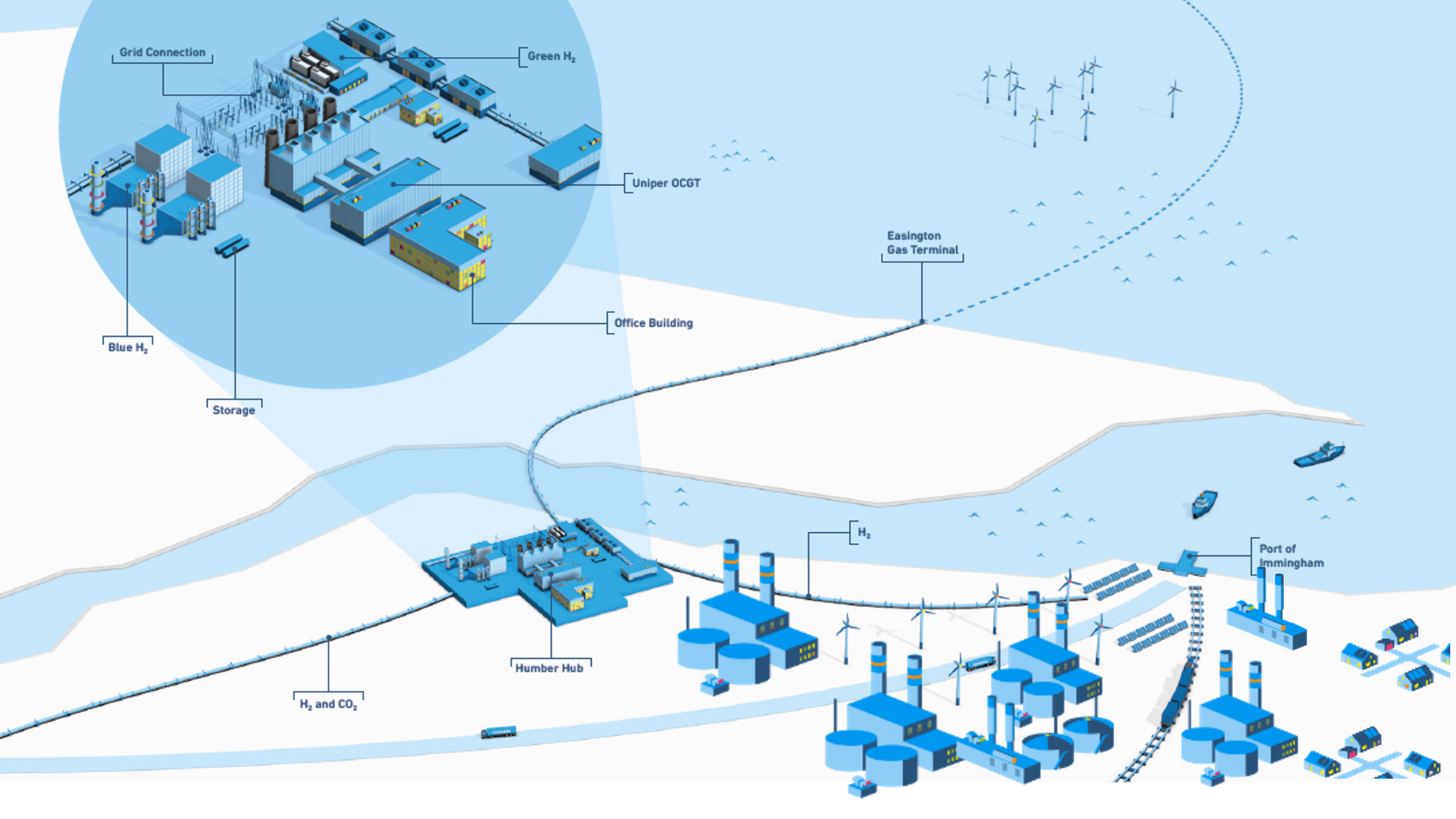